The Barbarienne is a font of amusement when she’s not a font of terror. (Actually, sometimes the two overlap, like an Evil Dead movie.)

In particular, she likes being naked. As did all her siblings. I never thought it was a good idea to shame a kid out of being naked, and was sort of curious if that meant I’d be raising a bunch of nudists. Naturalists? Whatever they call themselves these days.

I’m not anti-nudist, exactly, but I do think clothes are an essential matter of politeness. I think it’s good that there has to be a context for nudity.

All bets are off if you’re three, though.

I’m not sure what the cut-off point is, exactly, but there’s nothing quite like the exuberance of a naked toddler. They’ve all gone through periods where running around naked was about the greatest thing they could imagine.

As it turns out, none of the kids have adopted nudism as a philosophy. Around six or seven, they all start to develop a sense of privacy about their bodies. Which I think is a good thing. (Though the rapidity with which they develop a sense of sovereignty over their bodies makes me not worried about “bad touches”: My kids all started at about 18 months with doling out the hugs and kisses on their own terms; you don’t want to be nearby when someone gives them an unsolicited pat on the head.)

I remember it being a problem for Calvin’s parents (Calvin & Hobbes) but, then, he was perpetually six-years-old.

In the Dark Knight Consterns post, Trooper brings up one of his favorite points: That comic book movies are good now because the people doing them are people who understand and like them.

To which I would only add: And technology makes possible reasonable approximations of the graphics in those comic books. You can’t make a movie about The Human Torch if you can’t come up with a reasonable looking man-on-fire effect. You can’t do a Superman movie unless you can reasonably make it look like one or two normal sized humans can incidentally trash a large city.

Another issue, however, is costumes. What comic book artists do is draw naked human bodies and color in where the costumes would be. Real life costumes, of course, hide definition. Take, for example, Superman.

Besides the bicep definition and the pronounced ribs, he’s impossibly barrel-chested. Compare to Chris Reeve, who bulked up for his role as The Man of Steel. 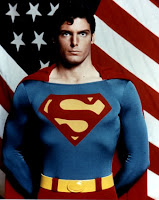 He looks almost scrawny, doesn’t he? This is a still, so he’s in the best light they could put him in. In the movie he almost looks slender. Probably few, if any, humans actually have even an approximation of that form.

And Brandon Routh’s not much better. Although obviously in superb condition, there’s no way to create a fabric that doesn’t hide definition.

Batman, on the other hand, started out pretty slender, and ultimately grew

into Frank Miller’s monstrosity. Miller, of course, is not what you’d call “naturalistic” in his styles. The angrier The Batman gets in The Dark Knight Returns, the broader and squarer his jaw gets. In this picture, here, he’s actually dwarfing the horse he’s riding on.

There were early actors who wore Batman’s gray suit, culminating in

Adam West–100% pure West. But by the time Keaton rolled around, they were adding fake muscles to the suit. Bale’s Batman outfit is, at least, supposed to be bulletproof, giving some justification for the articulated look.

Meanwhile, if you take a bodybuilder and paint a costume on him, the look is much closer, though without the exaggerated V-shape of the torso, and of course without the scale alterations. (Comic book artists change the size of the hero for dramatic effect, which is a little dodgy in live action.)

Curiously (heh), the X-Men movies go this route for Mystique who, I believe, is usually depicted as wearing a long dress (though split on both sides to the hip). Rebecca Romijn hardly needs clothing, however. Does she look like a superhero? Who cares. We haven’t seen hot blue chicks since the original Star Trek. 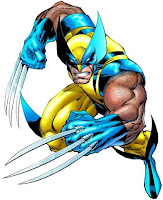 The X-Men movies made a lot of successful visual changes from the comic books. Could we take even Hugh Jackman (that guy’s ackman is huge!) seriously if he were in yellow-and-blue spandex with giant eye-flarey-thingies? (Seriously, what is up with those?)

Another X-Men character is Dark Phoenix. Here’s an inspirational photo.

Here’s the lovely Famke Janssen in that role, though looking a bit less provocative.

And lastly here’s our friend with the camera and models who like to be painted. Stirring, no?

This guy’s flickr page has a set of superheros, including higher-resolution versions.

The point, of course, is that one medium (comic book art) uses tricks that don’t translate to other mediums.

Slashdot reports that the geeky comic xkcd has changed the number of Google results for “Died in a blogging accident” from 2 to over seven thousand in just 24 hours. It’s past 12,000 now.

The comic in question.

This strikes me as hilarious. Not that a webcomic had this effect, but that Slashdot would report on it with wonder. That’s the way it’s supposed to work, isn’t it? Am I missing something?