Documentaries are sort of treacherous things. Even the most honest intentions can create a false image simply due to what materials are accessible to the filmmaker. As a result, I tend to favor documentaries that don’t try to make some overarching point but rather honestly tell you a particular part of a particular story from a clearly stated point of view.

For example, I enjoyed Supersize Me not because it was a startling exposé on the dangers of fast food but because Spurlock set the–clearly biased–ground rules in advance. He told you up front he was going to overeat, under-exercise, and otherwise skew things toward their gruesome conclusion. (He dropped that honest in his “30 days” series, unfortunately, making it unwatchable to me.)

I used to be a big fan of Michael Moore, watching “TV Nation” and “The Awful Truth” quite dedicatedly, up until the point I realized that, in his world, nothing is more important than the point he’s making. He treated people quite badly on his show–people who did nothing other than allow him access to their world and dare to differ in their opinions. Later I found out how terribly he had slanted his seminal Roger and Me.

Sicko is sort of fascinating, I admit. It’s apparently technically accurate while at the same time, such a blatant insult to the intelligence, one wonders why anyone would bother. When he cites a survey stating that the USA is 36th in world health care, just slightly ahead of Slovenia, one wonders why Americans aren’t flocking to the slightly higher ranked Costa Rica. Or why Canadians, at #30, would so much as dream of coming to the USA for medical treatment. (A touching fictional characterization of this is shown in The Barbarian Invasions.)

He even extols the virtues of Cuba. Cuba! Castro sets up a glossy free health care clinic and a bunch of “useful idiots” flock down and say how wonderful it is, without ever bothering to notice how few Cubans actually get to use it and are relegated to dumps. Cubans come to American on freakin’ doors! And even with the sham front, Cuba still manages to get a lower rating on that survey Moore tries to shame America with.

Besides which, Farenheit 9/11 (the title a stupid and horrible rip-off) stayed in theaters so long a bunch of good indie films and docs never had a shot locally. It’s up there with What the #$*! Do We (K)now!? among films that annoyed me just by being successful enough to take up valuable cinema space. (And you just know they hung on because true believers were dragging their poor friends to see these “life-changing movies”.)

Anyway, the great documentaries aren’t political. Or rather, the great documentaries that ARE political tend to be viewed through a different lens over time. I go to the movies for a lot of reasons, including escaping politics. I’ll take a little movie like Paper Clips or Murderball to show me places and lives I’ve never known, or a Bukowski or Divan to show me people from different walks of life.

This all brings me to the latest documentaries I’ve seen, both wonderful, and both very different: The King of Kong and In The Shadow of the Moon. Reviews coming.

The new cable box is pretty good, though it lacks some of the niceties of the old one.

One thing I can’t believe–makes me groan whenever I see it–is that the movie guide is in alphabetical order, but includes “The” as part of the sort.

(Sigh.) I’ve learned to accept the use of ASCII-like sorting, such that all the numbered entries appear at the top (40 Year Old Virgin should go in “F”), but this is just plain don’t-care-sloppiness.

The guide itself seems to have different content, and less guide info, including missing the information about when a program is going to stop being available.

Meanwhile, the new cable box takes, I’m told, 45 minutes to reboot. Let that sink in for moment. 45. Minutes. Actually, when we rebooted here, it took 4 hours, because it’s not just rebooting, it’s downloading information, and lots of people were apparently rebooting at the same time.

I can download many gigabytes in four hours. Why do I get the feeling that this particular application hasn’t been optimized?

Me: “Wow, I can’t believe you play the lottery!”

Him: “Yeah, well, invading Iraq was stupid, too!”

I ran across Shannon Love from Chicago Boys the other day on the ‘net. I’d tell you where, but I can’t recall. It was a piece about “kids today”, describing some perceived bad behavior of teens. (One item involved a kid not finishing food he got at a buffet because he discovered he didn’t like it, or had discovered something more to his liking. That doesn’t exactly appall me.)

Anyway, I made a comment about being a parent first, to which Love responded by saying parents shouldn’t be friends at all. I’ve heard this sentiment before, and it always amuses me because it invariably downgrades friendship–and, in a weird way, parenthood.

Parents do have a unique responsibility to their children: They keep them physically safe and prepare them for independence. But the very act of good parenting reduces the need for parenting in the future, right? At which point, what sort of relationship will you have with your child? At some point, the parental role is more honorary and even nostalgic than actual.

And here’s another thing to chew on: One role model that serves children well is how to be a good friend. Say, the kind of friend that doesn’t “let friends drive drunk”. If you’re only dealing with your children from the rarified atmosphere of parental authority, how do you suppose they’re going to deal with others?

This is just the tip of a very big iceberg, and I’m not planning to write a whole bunch about parenting, but I thought I’d get that (partly) off my chest.

CodeGear has come out with a new version of Delphi for .NET development.

The company seems a lot more vital than Borland, though I can’t comment on their “Application Lifecycle Management” business. Maybe that rocks the ALM world.

But as far as development goes, CodeGear has revitalized Delphi and made forays into PHP, Ruby, and Eclipse-specific Java tools.

In fact, my current problem is that an important outlet for me, DevSource.com, isn’t particularly interested in non-dotNet/non-Visual Studio stuff. It’s always been an MS-sponsored site, but the previous editor (Esther Schindler) was willing to entertain anything she thought would drive eyes to the site. This isn’t to suggest that the current editor (Jeffrey Cogswell) is doing anything wrong–it’s entirely possible that the readership is only interested in MS stuff–but that I need to find more outlets.

I’ve been considering starting my own online tech magazine, which probably isn’t very bright given the other projects I have going, but I miss the days of PC Techniques. I need reviews of software tools, but I love light-hearted writing and little projects that remind us why we got into the business to begin with.

In the meantime, I have a review in progress about Delphi-dotNet for DevSource.

The Retromedia Forum is place where real filmmakers hang-out and discuss the craft and the business. Yeah, real low-budget filmmakers, but don’t be such a snob. These guys make more movies and do more business in a year than your average big-budget guy has done his entire life.

Seriously, Fred Olen Ray, who hosts the joint, is filming something like four films back-to-back, which I think is only going to last him till Thanksgiving.

No, not Coretta Scott King, that was a while ago.

Loretta King, star of Bride of the Monster, died on September 10th of “natural causes”.

Janet Lawton: When did I tell you my name?
Dr. Eric Vornoff: You didn’t. But since you were unconscious, I took the liberty of looking into your purse.

Re “& Etc.”, I love bi-lingual stuttering like “The La Brea Tar Pits” and “The Hoi Polloi”.

Added a link to “Loaded Questions”, which features Kelly Hewitt’s marvelous interviews with various authors. Kelly and I have run the Loaded Shelf and Kingdom RPG together for over three years.

I’m fooling with blogger’s templates and so far, I’m not terribly impressed. It seems eager to discard changes you make. (I realize the technical difficulties of changing from one template to another, mind you. But it all makes me want to develop my own software….)

Because the cable box is out, Burns’ WAR documentary is on.

Frankly, it’s not that interesting to watch people play it, no matter how fast. It’s just luck.

As a person of possibly Belgian descent, I’m distressed by the lack of stories from Flemings. I think I’ll soothe my cultural wounds with a waffle. 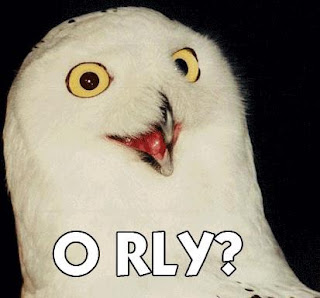 We got a new cable box on Sunday.

First of all, you gotta give Time-Warner props for volunteering a guy to come out on Sunday. This was in response to a call I made Saturday morning at 2AM because the rain had knocked everything out (phone, ‘net, TV).

The guys doing support are actually pretty cool. Every now and again I get one who sounds incredibly bored, but mostly they’re grateful if you treat them like real human beings.

Anyway the new box is pretty slick, except that it’s not working. And for all the world, the little LED read-out looks like it says “OCRP”, which I immediately read as an “ORLY”-style “Oh, crap!”

It’s actually reading “OCAP” which apparently stands for “Open Cable Application Platform”. (Sight unseen, I have to wonder if that “O” there isn’t being abused.)

We’re currently in the stage of “Yeah, I liked the old one better” and this is not diminished by the recently discovered fact that it takes around 45 minutes to boot the damn thing. (Apparently, it can take less or more, the vagaries of which also do not build confidence.)

We replaced the old one because we had to reboot it daily (at least) to keep the video-on-demand working. We rebooted this one for the same reason and it never came back up. Let’s hope it’s not a daily thing.

I could sure use my Zodiac about now.