When The Boy was young, he invented a game called “Paper Wars”, whereby we would draw an assortment of monsters on paper and then engage them in battle. The Boy’s mind was such that he was always making games. However, his explanation of the (always lengthy, convoluted) rules was enough to render people (literally!) unconscious.

The Flower dabbled in such complex rules for a bit, but lacked the somnolent powers of her elder brother. In any case, when we draw, I quite naturally draw things I think will interest her.

So, a session or two ago, I drew a faerie. This is sort of uncharacteristic of me. I usually go for the goofy, or the weird or the comical. I don’t have the discipline, most of the time, to really clearly envision something and hold that image in my mind long enough to draw it.

I scanned this one in—and this is another area where I’m weak, trying to figure out how to transfer something to digital form—and it came out overly light: 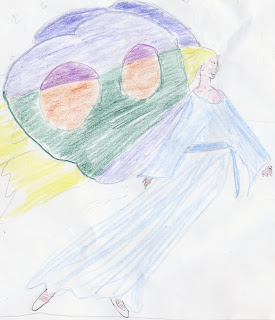 Then I sharpend it, which made the colors a little truer, but which also exaggerated all the minor shadings: 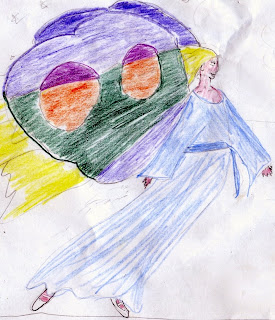 Anyway, The Flower liked it, which is all that matters.